About The School of Research Science (SRS)

The School of Research Science (SRS) devotes considerable resources to ensuring a breadth of curriculum experience which is not commonly found in schools offering a non-residential provision. In delivering 30 guided learning hours each week for all students beyond the Foundation Stage the school is able to blend learning in both the Arabic and British traditions in a manner that is purposeful and continuously developing.

The The School of Research Science curriculum offer is balanced in such a way as to offer exceptional social, moral, spiritual and cultural development to children and young people aged 3 to 18. Additionally, the bilingual character of the school is exploited so as to allow curriculum access to students of varying ethnic origins; reinforcing and deepening learning through an emerging collaboration between teachers drawn from quite diverse backgrounds.

How would you rate The School of Research Science (SRS)? 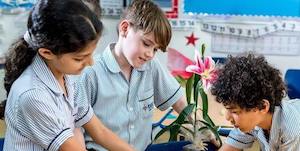 You can easily add The School of Research Science (SRS) to your shortlist.

32 Reviews of The School of Research Science (SRS)

How would you rate The School of Research Science (SRS)?

I really dislike SRS, most of the reasons being: The building, the education, the staff and the system itself. The building is nice from the outside, but when you enter the school it gets worse. The classrooms are messy all the time and it’s often the students fault. The bathrooms are horrible, they always smell bad, the cleaners are always on their phones, only 2-4 sinks work, the soap is so cheap and the most of the doors do not lock. The cafeteria is not acceptable, their food is very cheap quality but prices are too high. They serve the same food everyday and it contains so much oil it’s very unhealthy and unappetizing. The canteen doesn’t have many tables to sit at so most students have to sit outside in the heat and the sinks in the canteen don’t work. The uniform is horrible, it gets more expensive each year even though it doesn’t change, a simple white shirt is expensive. The quality of the uniforms are SO bad, one wash and they shrink, this is why most students buy their uniforms from ‘M&S’. Also they don’t have enough uniform for the whole school, the jackets haven’t been available since the beginning of the year and we’re 2 months in. The student ID issue is annoying, the IDs are used for the canteen and lockers, but sometimes the lockers don’t unlock with the card. Also when you put money in the card for the canteen, you can’t take some of it back out if you needed cash for the vending machine, which most of the time steals money. Another thing is that when you put money in the card sometimes it doesn’t work and you’re money is wasted. This takes me to the technology, the technology in SRS is very poor. Most of the time the WiFi never works, it’s always down and it delays the lessons. Computers always break down and the smart TV’s are old. Every time a teacher has an issue with a device, they have to call IT and they take a long time to fix the issue which delays the lessons. Most of the teachers are not qualified enough to teach. Some teachers are bad at explaining lessons which confuses students. Some teachers are unprofessional and the way they hire them doesn’t make sense. The students in SRS is one major reason my daughter wants to leave. The girls in school bully each other and the staff do nothing. Also the girls are treated unfairly compared to the boys, girls are not allowed to have a football pitch and the teachers treat each gender differently. The school rules don’t make sense, students are not allowed to have colorful items. The system to buy the uniform is bad, you have to stand in 4 lines just to buy a shirt. One last topic I want to talk about is when they have the inspectors come, the school changes completely. When there are no visitors, teachers are unprofessional, the school would feel very messy and the students wouldn’t be on their best behavior, but when we have visitors over, everything changes, the staff set an unrealistic example for the KHDA which is why the school is still considered “a good school”.

The school of Resaerch Science is one of the best schools in dubai , Foundation satge is amazing with excellent facilities

The school is perfct

The School of Research Science is an excellent school, especially in teaching science and math, and they support the relationship between the students and the administration especially in the secondary school in the boys section, so we are feeling that our sons in safety hands,,,

A great and great scientific edifice rich in values, science and knowledge, whose inhabitants are one cohesive family

A great and great scientific edifice rich in values, science and knowledge, whose inhabitants are one cohesive family

Excellent school specially given the fact that it offers an Islamic environment. Management is very kind and supportive they listen to the parents and address their concerns. Highly recommended.

Oguz Ozkul, a month ago

The school barely does anything to stop bullying, it takes them 2 weeks to respond to an issue, tables are vandalized and cut up and there's a weird stain in the science classroom that the faculty doesnt take notice (i don't know why) the food is cheap and overpriced and lockers can be easily opened and can override the students locker, the only thing that's good is the teachers but it's a complete gamble on what you get, but what ever you do never, ever go to this school

School is very expensive for nothing and should not be overrated. From the outside, it’s a big fancy building but from the inside, it’s something else. School uniform is a very cheap quality but they raise the price every year even though it's the same. The sports uniform is very cheap quality and stretchy. The uniform pants shrink very fast and are neon blue not navy blue. This is why most of the students buy their school uniform from Marcs and spencer. The school assumes it is healthy but the food in the cafeteria is full of oil, they raise the price of food every year for nothing even though the food tastes like plastic and is not fresh. They even changed the company and now it’s the school’s company, which is much worse and staff are inexperienced. School bathrooms always have a bad smell even though school hire cleaners to clean the bathrooms but they are not well trained. Bathrooms are never stocked with soap and tissues. Cleaners are always on their phones. When school inspectors come the teachers are very good and they organise many activities but when the inspectors go they are very unorganized. When inspectors come we are not allowed to walk in the corridors during break and lunchtime, and sometimes not allowed to go to the bathroom during lessons and we can’t be late to lessons. School trips are very expensive and sometimes they don't provide us food and water during the trip. We always ask for trips and the principal never agrees, instead of taking us to a theme park, they take us to a park. We are not allowed to stop at a gas station during the trip. Some grades get no trips and some get a lot. The no phones rule is fake, students use their phones all the time but if a member of staff sees it, it will be confiscated until the end of the day. Students are always skipping classes and bullying and the school does nothing about it. English principals never allow Arabic teachers to throw a party or bring food into class and they never allow us to do anything fun during the lessons. Many teachers leave each year. Computers in the computer class are very old and don’t work properly. The teacher spends half of the lesson fixing the problems and waiting for the IT crew to come help fix the problem. Update: computers have been changed and they are very good. It is saving a lot of lesson time. Good improvement. I hope the school changes their mind about Ms Minal. She is a rude teacher that doesn’t treat students well and she doesn’t like it when students treat her the way she does. She is so bossy and has no patience. She is so strict on school uniform and checks the same student’s uniform many times a day. She is a new teacher that has no experience what so ever. She should not be responsible of the students. She should only be a sports teacher. She is not even trying to have students that like her she is just rude to all of the students. The canteen’s design is so low quality we have 5+ chair designs in the canteen. The chairs are torn apart and have big stains all over them. We have chairs that have animal hair all over them which grosses is out. Non of the chairs match each other, we have green, black, brown and white, and yellow chairs all made from different materials. Chairs have springs popping out of them. I don't recommend this school to anyone. If you agree with what I said, like this review.

It should be called School of Bullying Science... expensive for nothing... weak admin team... no control, decisions made based on supervisor's mood... when you complain, it takes ages until you get their useless action... I don't recommend this school !

See All Reviews for The School of Research Science (SRS) >

137 other schools in Dubai