Victoria Shanghai Academy Hong Kong (VSA) is an IB World School, located in Shum Wan next to the Aberdeen Harbour. We have over 1,800 students and offer three IB programmes - Primary Years Programme (PYP), Middle Years Programme (MYP) and Diploma Programme (DP). VSA emphasises a holistic approach at the heart of which is inquiry-based learning and teaching.

The primary section offers a bilingual education (English and Putonghua); the secondary curriculum is delivered in English and supplemented by a strong Chinese programme. In line with our Vision and Mission, Victoria Shanghai Academy Hong Kong aims to attract students who wish to strive for academic and personal excellence and be actively involved in a student-centered community that combines international perspectives and Chinese heritage.

How would you rate Victoria Shanghai Academy (VSA)? 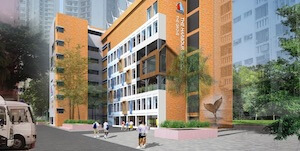 School founder is a PhD in Child Development and the school is run based on that. Excellent school.

You can easily add Victoria Shanghai Academy (VSA) to your shortlist.

How would you rate Victoria Shanghai Academy (VSA)?

Study here please, it will guide you across your entire life trust me.

I have to say though, VSA is a nice school and it's filled with a lot of nice teachers but the reason why I rated a 3 instead of 5 is because: 1. Some teachers have the balls to understand the student's situation(they understand more when they have kids) such as anxiety and when they get bad grades, they do help them but some teachers don't. Back in Y9, I have a science teacher and the grades he gave others were pretty strict. I got a 5 for one of my criteria in my lab report and he rounded down to a 4 and told my parents about it. SERIOUSLY?????? 2. The school lunches were one of the worst things u can find in the school. Sure there's a lot you can by such as snacks, drinks and yogurts but all of them are way too over priced. A lunch costs $32 and it doesn't include anything and a 7cm diameter cookie costs $10. Almost every secondary student in VSA reported this problem to the student council but when the student council quote "Your voice will be heard," It's the opposite thing. Also the vending machines are broken for FIVE YEARS REEEEEEEEEAAAAAALLLYYYYYY??????? 3. When it comes to bullying, the teachers don't really care. I was once in Y3 and someone like my age kicked me in the balls 3 times because I wasn't on his side. I reported to the teacher and she said "No fighting games". I got cyber-bullied back in Y6 and almost the entire class did that to me. Again I told the teacher about the matter and they didn't care. 4. Flex in secondary is one of the most boring things in school. You get to learn about stupid relationships and puberty. Teachers usually have this form where you get to speak up what do you want to do during flex but the form is utterly futile because the teachers never agree with out statement. Overall, this is a pretty good school but when all these matters are solved I will definitely rate this a 5 star.

4.5 stars. I really liked VSA, and I wish I could give it five stars, but if I'm being honest, 4.5 stars is already a bit of a stretch. The reason: Although the school teachers were very good and nice, the students were often rude and mean. As I looked at the other reviews, I noticed quite a few people observed that unless you were in the school from kindergarten/grade 1, you would never really fit in. I agree - and although sometimes the students make an effort, you know you will never truly replace those bonds. But even aside friendship, the bullying in the school is not to be ignored. EXTREMELY cruel bullying occured to other students as I went to VSA. The one very popular girl convinced everyone else to do the same to one girl - and I'm sure it made her life terrible. All for a bad reason, which I won't state, due to privacy reasons and respecting this girl's privacy. The school teachers were very nice and taught very well, but sometimes I thought that it was TOO easy. However, it was quite light-hearted. I almost never did my homework and simply finished it on the bus because it was so simple. Also, even though VSA focused on well-being, some of the students were really cruel and made other's well-being... well, turn... bad, I guess. The well-being lessons, although very important, were very easy and I think most students just snoozed through it, and it was the perfect lesson to pass notes and whisper to friends. It wasn't really taken seriously by students. How hard would it be to make a slight improvement to that class? Now for the specialist lessons... Overall, I think that it was just fun. It didn't really teach me anything, and it was just a break from class. Maybe others would disagree with me, but from my experience, the classes were just mediocre and didn't really require any brainpower. PE was just being athletic. However, one time there was an incident in which we were required to do a Google Slides about a sport or activity we had chosen to improve upon and our progress. The PE teacher thought only one of our Google Slides was any good, and just because it was prettier than the others, and looked as though more work had been put in - although that was just because it looked nice. He shamed every one of us one by one as he went through our slides - and it was SO embarrassing. During PE lessons, if you were a slow runner or someone un-athletic, people would often roll their eyes, especially if you were in a team with some athletic people. It was embarrassing to be one of those people who just wasn't SPORTY. Drama was fun, in my opinion, there were lots of interesting projects but I didn't really learn much - or anything from it... Other than Wikipedia was not to be trusted. That's the other thing: Why is Wikipedia banned in almost every International School in HK?

I think that if people want an IB school, a good option is VSA. First of all, VSA provides a bilingual education for all students. If a student needs development for their Chinese, VSA provides extra help for those students. Teachers in VSA (especially the upper years) encourage all students to be bilingual in their work. Secondly, VSA has almost finished a $420,000,000 dollar campus expansion, which will provide good facilities for students and teachers. Also, most of the rumours about VSA are fake. While I was reading this website, I came across a very strange review - one made by Alex Zhang. There has never been any snakes in the school campus, although there are a family of wild boars nearby, they've never actually come close to any of the staff and students. Thirdly, VSA provides many great opportunities for students to have a bit of fun. For example, this year (2022), VSA offered many extra activities/challenges, like making posters for special events. There's also a daily challenge to help improve student's Chinese. The staff are friendly and helpful, although some teachers can be quite strict and mad sometimes. Usually teachers get mad because something or someone is annoying them. VSA also cares about the safety of students, especially during the COVID-19 pandemic. There are rules about taking your mask off and talking while eating, as well as reminders to wash and sanitise your hands. However, there have been a few cases recently, but most of the people are safe. So to conclude, VSA is definitely a good IB school.

Very good and and it is big

Both my children went to VSA. My elder one couldn't wait to leave and I quickly pulled out my younger one after a year my elder one left. When my elder one left, he was so happy to leave and he is in a new school in the UK now and he told me that he had the worst time in yr6-8. Yr1-5 were like playing all the time in school and after school it was my responsible to home school him Chinese, English, Maths, etc. He didn't learn much from Y1-5 to be honest. It was seriously a wrong choice to send my children to VSA.

It's a pretty good school but some teachers are biased and get mad, other than that its a good school and every student is friendly and nice

VSA helps children grow, but not only that, they encourge them and help them reflect.

VSA is an encouaging environment that helps students grow, and even in these hard times they are doing great. I will never forget a school that help students grow and offers programs and all sorts.

Kids watch too much YouTube in class and even though chartwells is disgusting they still buy a lot of food from them... but then the teachers are nice except for a few....Boy on my left, girls on my right

I got a fever and a stomach ache when I ate the food, but there are nice teachers in the school, some that actually respond when I say hi.

As a student of this school, there’s too many bad kids to exist in this school. Students often swear and talk about private parts in my grade, not just my grade, but people from primary as well (told by friends at school). Teachers are respectful but the food and students are the downside of this school. I’d rather move to a local school with the same education in Canada.

Overall OK, but I think the food is gross. The fries are soggy, the burgers are like pork croquettes. Prefects all think they're the boss like Donald Trump or Boris Johnson. Drama teacher sarcastic.

52 other schools in Hong Kong