About The English Montessori School (TEMS)

The English Montessori School Madrid (TEMS) is a private co-educational British School in Spain, which caters to the educational needs of students of the Spanish and International communities in Madrid. The school is recognised by both the Spanish Ministry of Education and Culture as a foreign British centre and by Great Britain as a British School in Spain. Children from the age of three to eighteen years of age are admitted to a complete and highly successful educational experience. Though the majority of students are Spanish, numerous nationalities are represented in the student population. Traditionally The English Montessori School Madrid students rank among the best of the students throughout the Spanish and International schools in Madrid, on external exams taken by those students. Accordingly, all graduates of the senior school go on to higher education.

How would you rate The English Montessori School (TEMS)? 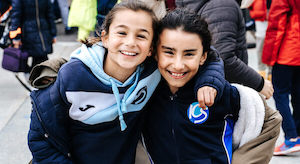 You can easily add The English Montessori School (TEMS) to your shortlist.

How would you rate The English Montessori School (TEMS)?

Bad school overall, I was on it for only a term and we had to leave because it was THAT bad

This is without a doubt the best in murcia and madrid. it is the only colegio ingles where all teachers studied in oxford or harvard. they earn 60 000 e a year. and are experts in teaching a subject to kids whose parents dont understand a word. to involve the parents. the best marks on the national exam to go to medical school or law or economics or engineering. number 2 if a kid wants to study history or geography. it also employe its own students 6 years after.. thats to say their graduates speak so well that you cant tell the difference. its not cheap though. at 1800 e a month its expensive but some of the richest familes in murcia and madrid have kids here..these are the statistics.

We are very happy with the education our son receives at TEMS secondary school. The school runs very well, with continuous and fluid communication with parents. The curriculum is the UK system up until GCSEs and they are now introducing various A-Level options. The school has been impeccable with its management of the current COVID-19 crisis with continuous updates. It has taken a very proactive position weeks ahead of the delayed response of the government and many companies. They already used Google classroom as an integral part of the classes so working from home has been a breeze. Very impressive! We chose this school (as did our son) because there is a very down to earth, no-nonsense attitude that we appreciate. The headmistress and the staff run a very tight ship but there is a very kind and human aspect to the whole outfit. We certainly feel that our son is receiving a top education and that he is well looked after. As you'd expect from a UK curriculum, learning is very much practice-based and less theoretical, which for us a BIG plus for us, the science labs and IT are an example of that. We weren't particularly looking for a Montessori school system, and the previous headmistress was quite open about the fact that Montessori is more focused in the primary school even if there are values that go through to secondary education, that was fine for us. Whilst there was been some unexpected staff turnover over the last couple of years, the core team is solid and I think the school has handled and adapted well, we didn't notice any impact with regards to our son's learning. As far as we are concerned 5/5. Keep up the good work and thank you. :-)

I don't really like this school because its expensive and it's not worth it and a lot of teachers are just bad. I wouldn't recommend anyone to come here. Don't believe me? Go see the school yourself, or send your son there and wait for them to start complaining! I know this wasn't very informative, but I can't add anything else apart from what other fellow students have said.

I was a student of TEMS for the whole 15-year period (i.e.: Reception 1 to Year 13). After graduating, I have seen the school's values plummet through the firing of employees and absurd and strict rules. Do not be fooled by the reputation they claim... this is inherited from the previous Headmistress Elaine Fitzpatrick. The new board is confusing discipline with authoritarianism. It hurts me to say it, but if you are looking for a liberal and critical education for your children this is not the place to go anymore.

See All Reviews for The English Montessori School (TEMS) >

47 other schools in Madrid