Platanus School Berlin is a bilingual educational institution (German/English) based in Berlin-Pankow with Kindergartens in two different locations and a Primary and Secondary School with a focus on mathematics and science. In our kindergarten, we ensure holistic and age appropriate care which takes the individual capabilities and talents of the children into consideration. Our ambitious educational concept and immersive bilingualism is ideal preparation for the children to continue in our primary school. Under the roof of a distinguished, listed building, our bilingual primary and secondary school offers optimal learning conditions, where natural curiosity and individual needs can find their place from Grade 1 all the way through to Grade 10. Here, children and young people can learn in a calm environment, test themselves, develop their talents, deepen their interests, learn about cultural diversity and internalise languages. The time a child spends at kindergarten and school is an intensive and also incredibly important chapter in their lives and we would like to invite you and your child to spend this time with us in an international, caring and open community.

How would you rate Platanus School Berlin? 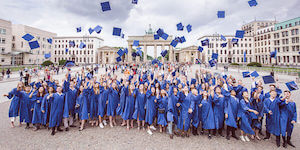 You can easily add Platanus School Berlin to your shortlist.

How would you rate Platanus School Berlin?

Perfect. It was great at Platanus. I went to the school for 6 years and I never regreted it one day

We had our child at Berlin Metropolitan School and we weren't happy. We were able to move him at the Platanus. Today are 2 months we joined this school. We are amazed and so happy we made the decision!!! This school has an amazing teachers team, high quality teaching, good discipline and ... very simple: as parents we feel everybody cares about education! This is not a business, like lots of private schools are. I would suggest this school to everybody that is moving into Berlin. Real bilingual school :-)

The place where my children love to be..... KINDERGARTEN Our eldest started attending the Platanus Kindergarten in the Vorschul year. She had been at a previous day care in Wedding. Honestly, this change was a sigh of relief. The children are actually encouraged to use their minds and be creative. They attend regular excursions, which was something so rare in the old Kita. They learn so many interesting things, especially nature is a big theme. My youngest attends the Kindergarten now and loves going there. SCHOOL Our daughter has been blessed with the best teacher you could have imagined these last three years. They are very encouraging at the school and it does feel like a 'big family'. We could not comprehend sending our daughter to a school with more than 600 students, especially with mixed grades in one classroom. I'm old fashioned and am a fan of the individual class concept. There are a maximum of 24 children per class. Team teaching is a big BONUS here. There are great AGs/clubs provided by the school. The English staff are young and don't stay for more than a few years. This isn't surprising as they gather experience and move onwards to the next place. I do not agree with the negative reviews here: no school is perfect. In contrast, we have only experienced a very welcome, supportive, and encouraging atmosphere.

Alycia Paulsen, a year ago

We had an absolutely horrific experience with Platanus. Our child was a student there for two years. At first we assumed that a lot of the differences were cultural, considering that we were coming with a North American perspective. Teachers and staff yell (scream) at the children. It is ran in a very militaristic manner. When we first signed up for the school, they assured us that they had just hired a 'German as a second language' tutor since it is a bi-lingual school. They did not hire one until the second year of our child's time there. When we enquired about it, the principal responded "by law we are not required to have one". And that's fine, but a pretty low response if you told us there would be one a year prior. To make things worse, we had two incidents with two(!) different teachers at the school PHYSICALLY HURTING our child. The first teacher grabbed our child's arm so hard he left bruises. At first, the school showed concern, but there was no punishment from the administration for the teacher's actions. A few months later, another teacher pushed our child against a pillar in front of the whole class. We were fed up and (rightfully) outraged. We contacted the administration and they ignored our complaints. We didn't even get a response! Our child's psychologist took us to the equivalent of 'Children's Services for Schools' in Berlin, but unfortunately since it is a private school their hands were tied and were unable to do anything about it. They advised us to go to the police or hire an attorney. Since we were planning on leaving Germany after that school year, they suggested talking to a doctor. When we did, the doctor saw how terrified our child was and wrote a note to excuse them from the rest of the year. It was an absolute nightmare. I am sure Platanus is well aware of their power in being a private school. Many other parents had similar stories as well and when we left this past school year so were many other families. I tell you this to warn you and protect your children. There are many other schools available in Berlin, please, avoid Platanus at all costs.

19 other schools in Berlin