Notre-Dame International High School (NDIHS) is a College Preparatory American school, offering an American education in France, comprehensive French language instruction, and cultural exchange opportunities. NDIHS provides bilingual, college preparatory academics to students in grades 10 through 12 and is made up of international students from all over the world. The school introduces an exciting opportunity for non-French speakers to learn the French language and culture while attending an American curriculum held in English. Our small class sizes allows for challenging curriculum with individualized learning, all within an internationally rich environment.

How would you rate Notre Dame International High School (NDIHS)? 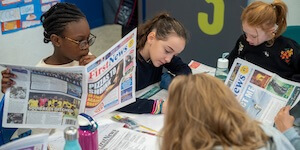 A school at the forefront of innovation 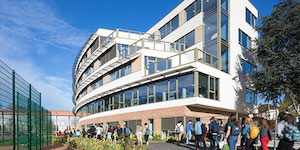 American School of Paris is AMAZING!!! You learn so much

You can easily add Notre Dame International High School (NDIHS) to your shortlist.

How would you rate Notre Dame International High School (NDIHS)?

Geena Boyce, a month ago

I attended during the first year of the school. It was my first opportunity leaving the US and I had such an amazing experience with the close-knit professors and I am friends with my international classmates to this day! The classroom was active, we could have incorporated more technology though I am sure that has been updated now. A quintessential French town near Paris surrounds you and you will feel nostalgic the minute you leave.

Samantha D, a month ago

I attended a few years ago, I was 17 and I can say this school made the person I became! I’m forever grateful to the teachers and to the Zicari for the support and confidence they gave me. Now I do a PhD in International Relations and for sure, the MUN club was a great experience. We travelled to Lyon for a MUN conference, best time ever!!!!! Love to NDIHS! Never saw again a campus like this, missing it!

I miss my school so much ! I attended for 2 years, and graduated there. Such an amazing time, so many friends. It was a few years ago already but I’m still in touch with many of my friends and hope to see them again. Mr Zicari and his wife as well as our teachers were really supportive at all times, even when we experienced some homesickness. I thank them for this. The first year I lived at the dorm, and the second year with my French family. They helped me so much to improve my French, that I could take French at University and hope to be a French teacher soon. I never attended a boarding school in France or elsewhere before I arrived in Paris, so I had to adapt, but really enjoyed the experience. It helped me become more independent for sure.

I highly recommend this school. I do not really agree with what the other students wrote about the food. I liked it! We could always select what we wanted to eat, it was fresh, good quality. There was also a kind of Café with snacks but you have to pay extra for that. For sure, it is not like in a restaurant, but for school food, it was not so bad at all. Also during the weekends we could go with the staff to real restaurants, it was so delicious…What I really like there is the park. The campus is a huge park with many old trees, and the castle. It was very challenging for me at school, because the level is good and really prepares you for University, but at first I had difficulties, not good grades. Also my English was not that good… It was hard but I learned a lot, because it is an American school in France, so you speak English and French. And also, the teachers had time to help us, and always encouraged us. I only stayed for a year, but will never forget.

I had the displeasure of attending this school for my senior year. It’s honestly really terrible ! It’s super unprofessional and the whole school is kind of a scam. Most of the teachers are ridiculous, rude, and don’t know the subject or how to teach well. One teacher talked to students like they were below him and made horrible jokes about suicide, assumed the financial statuses of students, and was extremely condescending, etc. Despite many complaints to the administration about him, nothing was done. Others just were a bit unorganized. My French teacher was very pleasant. There is also no read counselors, the counselor is basically the headmasters wife who also happens to be the science teacher. She was absent half of the year due to illness, and our college preparation period was basically a free period. In science class, she was so bad at doing math that mistakes were made almost daily. The cafeteria is absolutely disgusting and there is really no common space for the students to go to during their free time. We were surrounded by little french kids from the elementary school and it didn’t really have a place of our own. The french kids are the obvious priority even though we are paying far more. The dorms are like prisons.. they take away phones, don’t allow food, and are generally extremely mean and treat the students like inmates. Host families are hit or miss. Mine was really really bad. It was extremely unclean and gross. The food was usually expired and cooked in gross conditions so I had to buy all my food out while living with them. The twin bed I was provided had a weak, old mattress that tilted to one side and which I would literally come close to falling off of at night. My host sister and father were extremely sweet and understanding, but the brother was a total mess who was drinking daily and acting rather bizarre. Unfortunately, I didn’t get to spend much time with the kind host father because he was usually out. On another note, The school for the second semester of my stay was a literal basement because they were renovating something (this was not mentioned to us at payment, no warning was given... and these were definitely not the conditions presented by the website) . This is just unacceptable because it’s so far from what was advertised. Also, there is no gym, pool, tennis court , after school activities, etc. Teachers say to you to “create your own clubs” and “join French ones” but honestly this just proves how unorganized, careless and underdeveloped the school is. I feel ripped off, as do almost all the kids that were in my grade. The one upside of coming here and the reason why I don’t regret it is because I met amazing friends. Overall, I would really recommend against coming here. I uploaded photos of the school and the way it was when i was there, food from the cantine, and from my host family (food from there , the floor, and the kitchen).

33 other schools in Paris