Nelson Mandela School Berlin provides quality bilingual education to children from a wide variety of backgrounds. English and German are our school’s official languages, but we do not stop at introducing our students just to German and Anglo-American values and traditions.

As a truly international school and a member of UNESCO’s Associated Schools Project Network (ASP), it is our business to acquaint our students with as many different aspects of life on this planet as possible – and to enable them to make a positive difference wherever they go.

Being named after Mr. Mandela, sub-Saharan Africa in general and South Africa in particular have a special place in our hearts, and we try and let that show wherever and whenever we can – be it in our classrooms or beyond.

How would you rate Nelson Mandela School?

We felt the school, the concept of a multicultural school is amazing but the execution is incredibly disappointing, Most parents felt they just wanted a better academic experience for their child. This school has zero focus on reading and critical math concepts in the lower grades. The school looks the other way when it comes to bullying. There was a boy that was known for being mean to others. This went on for years, and the school did nothing about it. The kids use a lot of drugs in the upper school, they go to the park next to the school and come back totally stoned. Although we are staying another year, we were very underwhelmed with the level of enthusiasm amongst the teaches, staff and director.

My kids were in the Nelson Mandela school for 6 years. The teachers were terrible, especially Mr. R, There is a group of Australian teachers that stay in the Nelson Mandela because they can not find another job. It is so hard to get a place, but you would be disappointed with the Direction and Management of the School. They have been many issues relating to the inappropriate relationship between the teachers and students. I was so pleased to leave the school.

We just started 1st grade in August 2019. So far we have nothing but positive experiences. Compared to a few other Berlin international schools we toured, Nelson Mandela is by far the most diverse. You can see it in the faces of the students and children. In our Flex class (1st/2nd grade), there are students with parents from at least 10 different countries and this is just one classroom. A true melting pot of cultures, traditions, values, and backgrounds. The teachers seem happy to be in this environment. With each classroom having 2 teachers and an aid, they are well staffed with seemingly appropriate amounts of support. The library is funded by the parents association and has been a great resource for our new reader. The playground is well maintained. The catering services seem adequate. The 8am-4pm full day schedule, allows for plenty of break time for the kids to free play, between lessons. So far our experience has only been positive. Today we are just as happy as the day we received news we had been offered a place.

A really great school truely international and bilingual. A big school but with a friendly atmosphere.

Emily Smith, a week ago

We have been very happy at NMS with two kids starting in 2010. The community is strong, the international perspective of kids and families in refreshing, and the education is mostly on target. It is not as "highly mobile" as advertised but we see this as an advantage. Families are committed to Berlin and friendship flourish. As a public school, there are not as many resources as private schools, but it also means the economic backgrounds of families is diverse. Most kids are fluent in German AND English at home, many bringing a third language into the mix. Kids are more than just tolerant of differences, they seem to celebrate it when new kids enter the school who might come from unique backgrounds. I feel like my kids are challenged, without being anxious about learning. In 9th and 10th grade, they are still curious and active learners in almost all of their classes. Kids care about grades, but not so much that they lose sleep over it. The main drawback would be at times the administration and scheduling can be unorganized. On the optimistic side, kids learn to respond to a little chaos and be flexible. Lastly, we chose NMS so we would not have to change schools later on and face the lottery/crapshoot of applying to schools again after 6th grade. Knowing that our kids would be at NMS until high school graduation (they can choose from IB or Abitur) was a big selling point as we found navigating the German system as foreigners a challenge.

Best school ever!!! I’m miss it so much

We moved to Berlin from Asia some time ago and our son was admitted to NMS - we were in for a terrible and surreal experience. This school fails on so many levels, where to start..? - Above all, this is NOT an international school, so if you are an expat moving to Berlin stay clear. On paper, the school caters to "highly mobile" families but in reality, none of the kids in our class had ever lived abroad. It seems to be enough that one parent is non-German, but come on, 30% of Berlin's population is foreign, so that's the wrong criterion! As a result, parents at the school are not open-minded and there is no sense of community as you would normally find in expat circles. - Some people have commented on the school being racist. I guess that is partly true but it's not the kind of racism you would expect - what we experienced was a form of reverse racism. The school has a strange fixation on Africa. The curriculum and the school calendar are all about Africa - other parts of the world are ignored, and people seem to hold reservations againts the US and Asia in particular. As a result, children with at least one African parent are treated better than kids with parents from other parts of the world. As our child grew up in Asia, we wanted to make sure that he will be at an international school where his Asian background is cherished and appreciated. At NMS, the opposite happened. No one ever talked about Asia, Asian traditions or history, it was all about Africa and North Africa (Maghreb), so our son felt marginalized and unappreciated. - Academic standards are lower than average, so you will have a hard time changing schools once your kid is older. Several of our friends from school failed to secure a spot for their kids at other schools because they were too far behind academically. - As many have pointed out, the administration is a mess, teachers are not motivated, staff are calling in sick frequently. - Sex education in first grade: Our child was taught all about sexual intercourse, how it works, the technicalities of it. I kid you not, in first grade, at the age of seven! What is wrong with you people? - Safety concerns: As pointed out by others, accidents happen frequently at this school due to a lack of monitoring, sloppy staff and a chaotic administration.

I learned this place is self-contradictory: schools' target is highly mobile international families, BUT the school only admits students whose mother tongue is German or English. 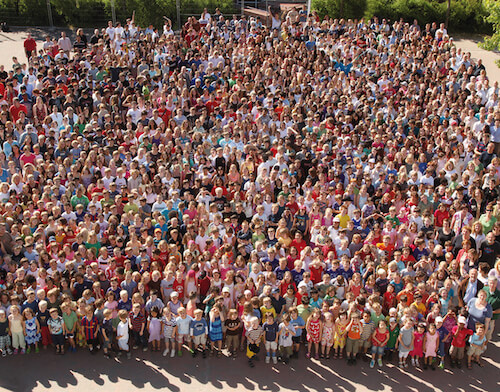 Our son is very happy with his teachers and classmates. Many nice parents and great activities.