About International School of Monza

At International School of Monza, a full International Baccalaureate (IB) continuum school authorised to offer the Primary Years Programme (PYP), Middle Years Programme (MYP) and Diploma Programme (DP), we endeavour to deliver the International Baccalaureate programmes in the purist of forms, with the school’s core values and the IB’s Learner Profile embodied in everything that we do. Both the school and the group to which it belongs, have an established record of success in the IB, from age 2 all the way through to admission to the world’s leading universities at age 18.

Perhaps most of note is the sense of collaboration that exists amongst all members of the school community. This is most evident in the way in which our highly qualified mother-tongue teachers and inquisitive students work towards a common goal of academic success which is seamlessly balanced with an inherent commitment to active global citizenship at every level.

How would you rate International School of Monza? 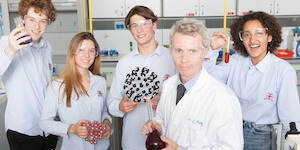 The best English school outside of the UK

You can easily add International School of Monza to your shortlist.

5 Reviews of International School of Monza

How would you rate International School of Monza?

This School moved to Via Solferino in Monza Center. Check the website.

Disappointing experience for us! First year ok. Our daughter was delighted and made great progress. Then, the school made a change of director and there it was a real tumble. Already, we have not really appreciated the personality of the gentleman, full of his person, arrogant, imperious tone, and who has a very limited listening ability, or he is just rude, as desired. This quickly generated an unhealthy atmosphere within the school which, until then, had enjoyed a friendly atmosphere between parents and teachers. Then, we faced several situations in which the safety of our child was compromised. However, in a population of such young students, safety is fundamental for the health of the child, for his daily peace of mind, but also for parents to be able to leave their child with confidence. Within the first class, there were issues of violence with a problematic child that the school failed to deal with ... to the point that several children took the brunt of it. This has been the source of repeated trouble and worry. But also, this school does not have sufficient facilities, chooses to move the children to the end of rue Solférino for sports activities. One day while driving there in the middle of the morning, I found 3 small children in front of the hood of my car !!!!!!! It is not the fault of the guards (who in this case really do a great job every day!) But of the number of adults compared to the number of children (ratio that the school does not wish to adapt to the age of children - just scandalous when the safety of the little ones is at stake). On groups of very young children, these trips were frankly perilous. Finally, the surroundings of the school are dangerous and it is nothing to say it. The zebra crossings were not supervised so children and their parents almost got hit by drivers. At that time, the parents largely asked the Director for a solution to be found but without much surprise, he did not live up to expectations, whatever he may have said about it. Among the international or bilingual schools attended by our child, this one really did not have our preference. It's a shame because the staff (excluding the Director) are friendly and professional, but in our view, the fundamentals were not sufficiently up to the expectations that one can have of such a school.

16 other schools in Milan